There’s a show titled ‘Friendzone’ in MTV. Well, it’s American’s ‘Katakan Cinta’ (yes..I know that early 00 show), but specifically for those who fall in love with his/her best friend. And also this cute meme of Ron Weasly. Meaning that we have been familiarize enough with the term of ‘Friendzone’. Been there done that, both as Summer Finn and also Tom Hanson. 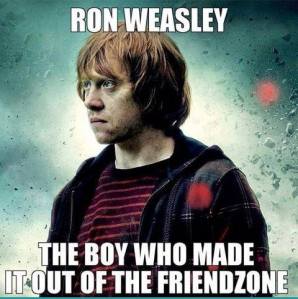 There are other zones (this is solely my personal opinion):

Yes, there are many zones. But apparently, I’ve just experienced the one that isn’t described yet, which is Mother zone. You know, when apparently that guy is just a bit younger and you’re so cool, he just popped a statement (not a question) “You are like my mother”. It might be as a more elaborated definition from Family zone.

Bottom line, it’s not cool to indicate how many his/her alikeness with your mom/dad.